No two people are the same. Our ethnic history and genetics play a huge roll in the look and function of the nose. Early rhinoplasty surgeries just addressed a Caucasian nose. Today’s modern approach to cosmetic surgery takes into consideration the unique aspects of each person’s features and facial structure. This includes their ethnicity, thus ethnic rhinoplasty.

Ethnic nose surgery is an extremely thorough and delicate procedure. The goal is to address areas of concern with the patient while maintaining the ethnic structure that makes each of our patients unique. This approach applies to both the form and function of the nose.

Because Dr. Cilento specializes in facial plastic surgery, he has performed more ethnic rhinoplasties than the average plastic surgeon. This gives him the skill and experience necessary to deliver the best results possible.

Rhinoplasty is one of the oldest cosmetic procedures. Early teaching and maneuvers were aimed at creating “aesthetically pleasing outcomes” were only intended to address a Caucasian nose. For the most part, reductive rhinoplasty produced small, pinched and often “ski sloped” noses.

Advances in this field by facial plastic pioneers such as Jack Anderson, Calvin M Johnson, and Dean Toriumi have been able to refine the rhinoplasty procedure. They were able to focus on creating a nose that works well and fits the unique characteristics of the owner’s face.

Dr. Cilento was trained by pioneers in open structure rhinoplasty procedures and always seeks to create aesthetic enhancements within each patient’s own ethnic identity. He pays close attention to the special qualities and variations of each patient to fully embrace the African-American, Asian, Middle Eastern and Latin ethnicities.

Am I A Candidate For Ethinic Rhinoplasty?

The criteria for considering an ethnic nose job are the same as any rhinoplasty. If you’re unsatisfied with some aspect of your nasal appearance and want to discuss a safe and ethnically sensitive way to correct it, you’re a candidate. 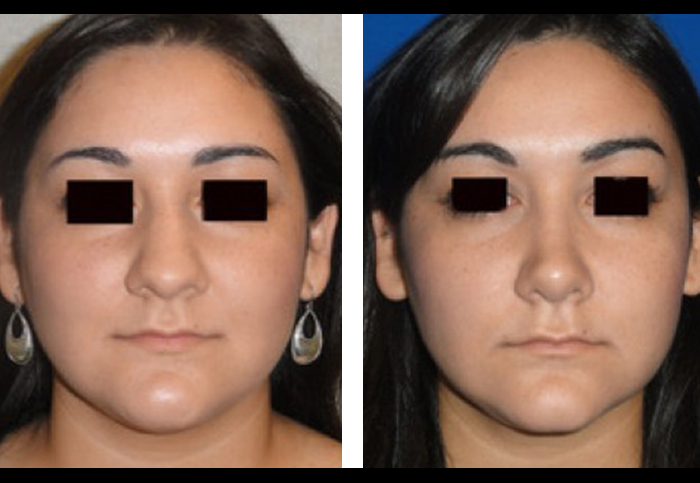 This young latino woman always felt her nose made her face look heavy. She didn’t want to make changes that would run counter to her heritage but wanted a more feminine and streamlined look. She underwent hump reduction via an open approach, alar base excisions (shown here to demonstrate how well the wounds tend to heal) and tip rotation and refinement. The pictures shown were taken 4 months after the surgery. 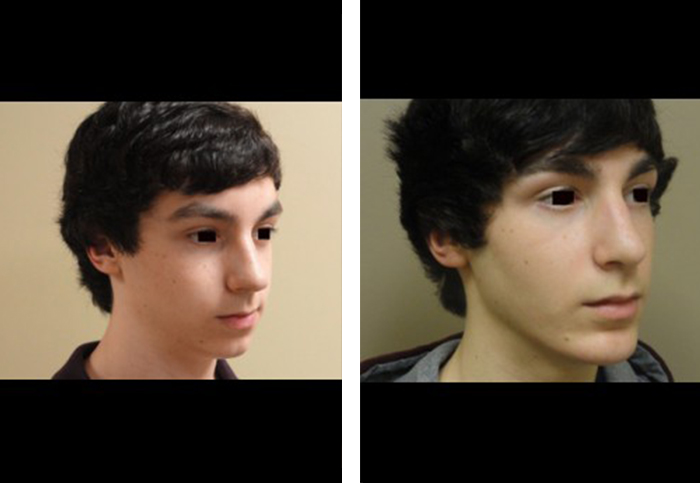 This is a 17 year old patient that was heading off to college and felt that his profile looked “weak” and was causing him to have anxiety and low motivation and confidence. Part of this came from his tall and thin nose but also his recessed chin. We performed a primary rhinoplasty and placed a medium sized chin implant as well. These after pictures were taken 1 year after his surgery. 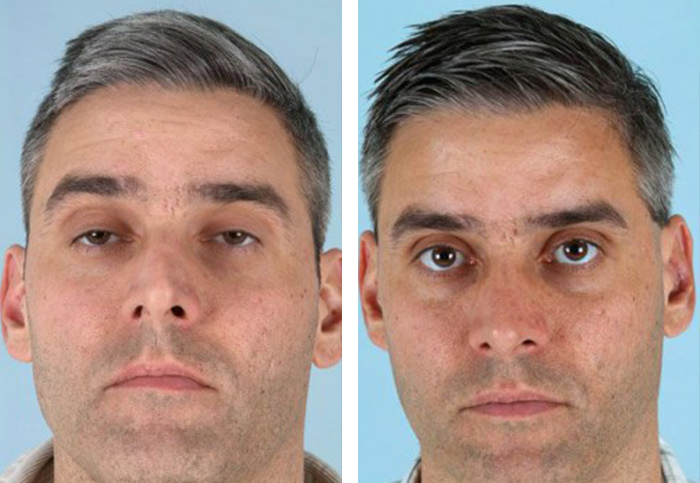 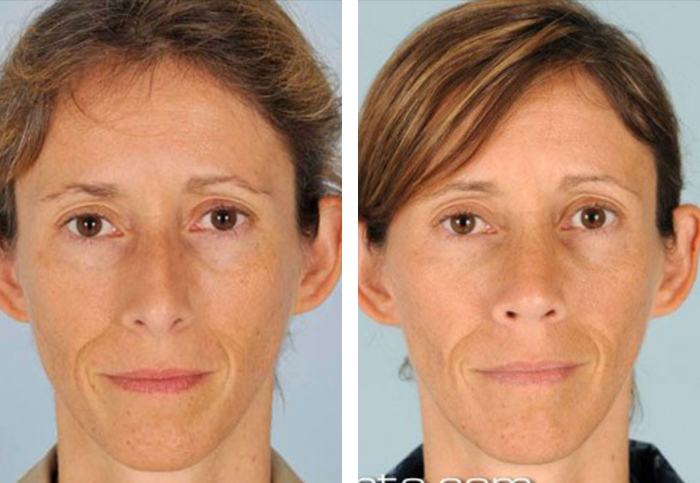 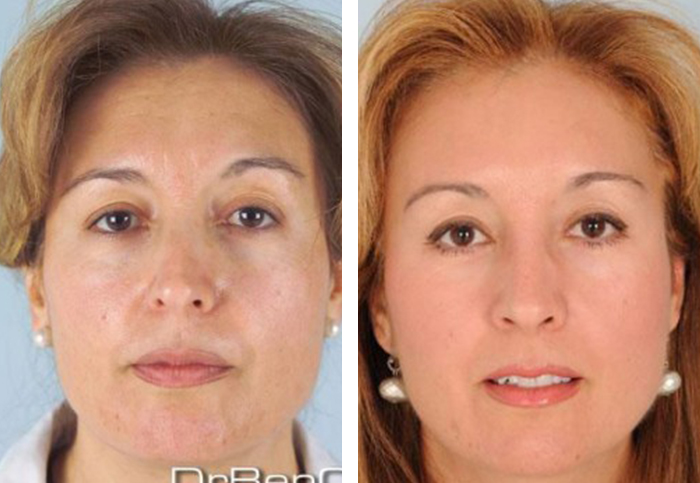 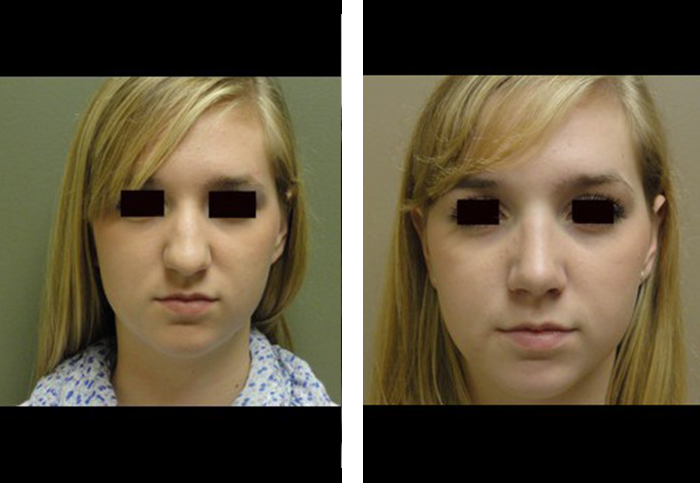 This patient presented at the age of 16 for nasal obstruction and aesthetic concerns. We had multiple conversations in order to assess her motivations and make sure she was sure about what she wanted. I performed a septorhinoplasty with turbinate reduction and lowered her dorm and narrowed the tip, turning it up slightly as well. These after pictures were taken 1 year after her surgery. 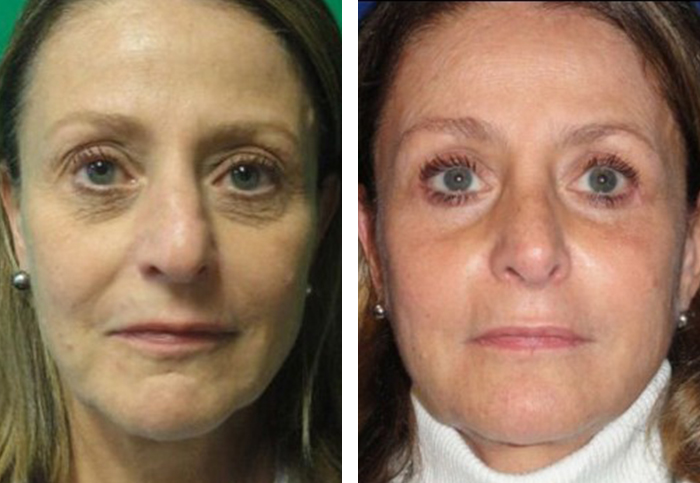 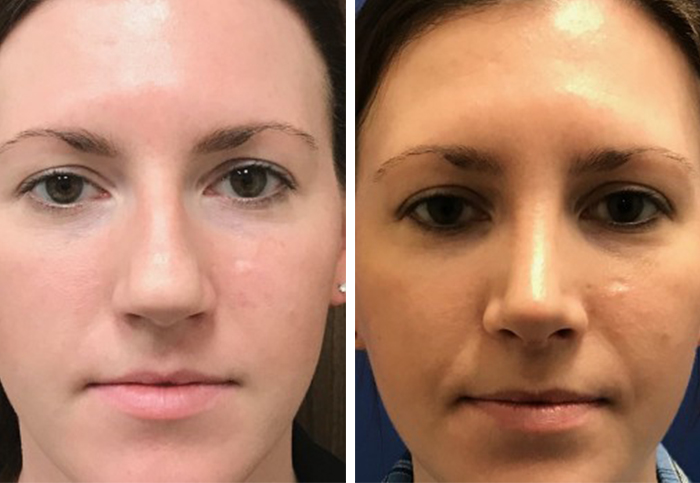 This is a side by side comparison of a primary rhinoplasty on a young woman with a larger tip. 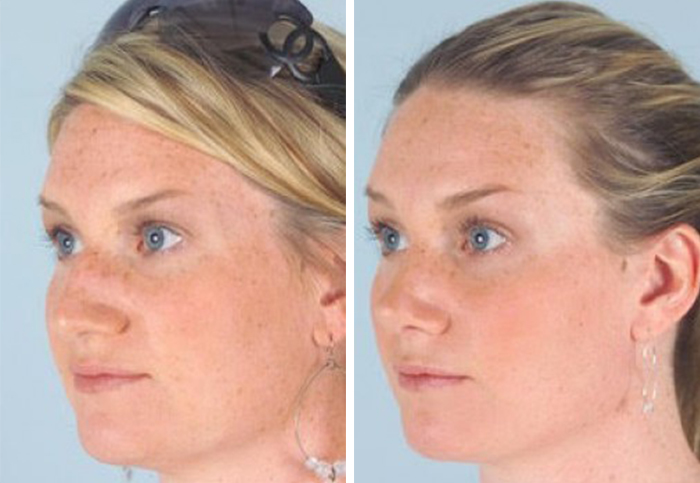 This 28 year old female presented with concerns of nasal persistent cosmetic nasal concerns and wanted a Primary Rhinoplasty. She complained of a “heavy look” to her nose with a tip that was not “elegant” in her opinion and a dorsum with a hump that was common to her family. I reduced her hump and tailored her tip to fit with our discussions about her idea of what an “elegant nose” would look like after the surgery. These pictures were taken at 6 months after her surgery. 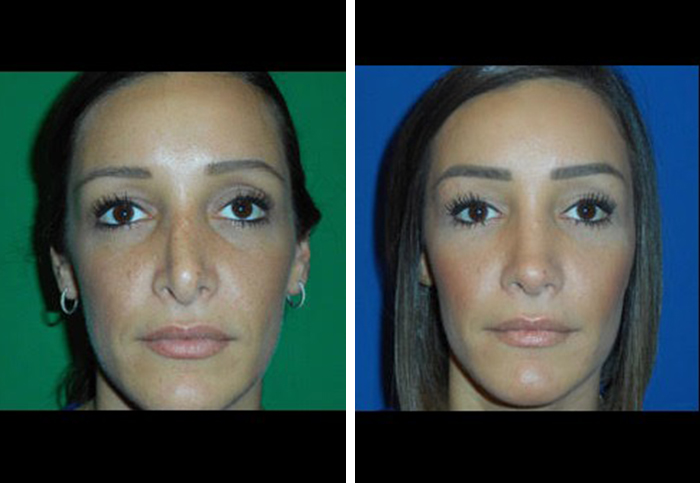 This is a 25 year old professional female who underwent a primary rhinoplasty in the Middle East 3 years prior to presenting. After surgery she had immediate nasal obstruction and over time had a collapse and derangement of the structure to the point where she presented below. She had severe scarring to the inside of the nose as well presenting a very difficult problem functionally. She had complete nasal valve collapse and septal deviation. She underwent a revision rhinoplasty using structural rib grafting, with ear cartilage grafting, septoplasty, nasal valve reconstruction and skin grafting to the inside of the nose to fix extensive scarring of the internal nasal passages. The after pictures below were taken one year after her revision surgery. 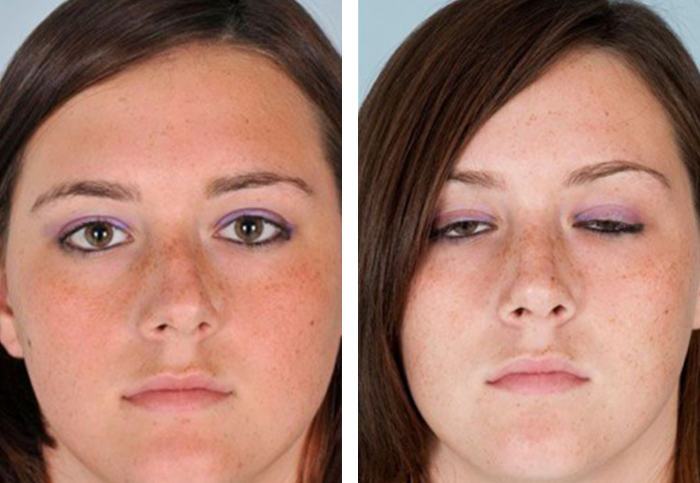 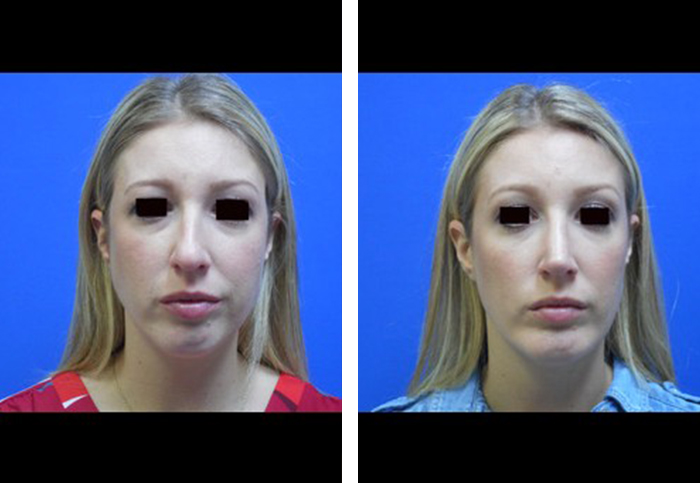 This young woman had always been self conscious of her profile and wanted to have a rhinoplasty. During her consultation I sat with her in front of her pictures and showed her what a chin augmentation would look like after her surgery. I did this using a morphing program that allows me to manipulate the images and demonstrate approximate results of surgery. We decided to do a septorhinoplasty, tip reshaping and medium chin augmentation. The photos below were taken at approximately 6 months after her surgery. 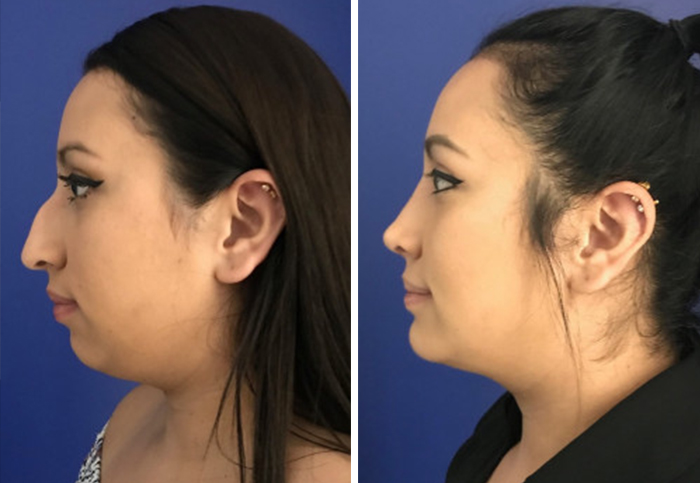 Common traits of a Middle Eastern nose may include:

If these are areas of concern, they can be addressed while also paying respect to the unique characteristics of this ethnic group. Some patients may want to have a more subtle surgery that preserves certain ethnic features, while others may want a more aggressive surgery to have a more personalized look. Additionally, the anatomic variations unique to the middle eastern nose must be understood to avoid complications. Dr. Cilento is familiar with these anatomic issues and consistently delivers stunning results.

Some common traits of the African-American nose include :

Experience is key in any ethnic rhinoplasty case. We take extra care to maintain the curvature of the nostril to avoid the “triangular look,” which is not considered aesthetically pleasing or culturally sensitive. Some patients want a more subtle surgery that preserves classically “African” features. Others want more aggressive surgery to have a more personalized look. Additionally, the anatomic variations unique to the African nose must be understood to avoid complications. Dr. Cilento is familiar with these anatomic issues and consistently delivers stunning results.

The significant diversity within Asian ethnicities provides many variations in common nasal traits. Eastern Asian people tend to have flatter profiles with flatter bridges and round nasal tips while those of South Asian ethnicity (Indian and Pakistani) may have long noses with pronounced bumps. Wideness can also be a concern, whether of the bridge or the tip. Because of the degree of variation, a personal consultation with Dr. Cilento for an ethnic rhinoplasty is essential.

If you've ever considered a rhinoplasty and maintaining ethnic traits are a concern, a consultation is the first step. We know life can be busy. Fill out the form below and we'll reach out to you to set up your consultation.

We understand the importance of the ethnic identity of our Latino population. Dr. Cilento grew up in Miami and is also fluent in Spanish. Generally speaking, ethnic rhinoplasty for people of Latin ethnicity includes significant variation. This is due to both European influences and those of the native peoples of South America.

Despite this variation, common Latin nasal traits may include:

The approach to Latin rhinoplasty depends significantly on the cultural heritage of the patient (African, European, Mestizo, etc.) A personal consultation can also offer you more insight into what you can expect based on your nose and personal desires.

Depending on the relative mix of each Latino patients background, there are many variations on the expected outcome. Each patient has their own picture in their head of what they want. Some may want a more subtle surgery that preserves certain ethnic features while others may want a more aggressive surgery to have a more personalized look.